Banks pivot from frantic hiring to job cuts amid dealmaking

Wall Street and European investment banks have an acute sense of buyer’s remorse.

After firms bulked up with expensive hires during the frenetic pandemic period when mergers and stock offerings took off, equity capital markets desks are bracing for a wave of job cuts amid a collapse in deal flow, according to people familiar with the matter at banks on both sides of the Atlantic. M&A and leveraged finance jobs are also at risk, the people said.

The Russian invasion of Ukraine, fear of recession and scorching inflation in the U.S. and Europe are coalescing to make for one of the worst slumps for investment bank dealmaking since the global financial crisis. That’s shown up in a plunge in fees as Wall Street banks reported second-quarter earnings this week.

Executives across a range of firms — including Bank of America Corp., Citigroup Inc. and UBS Group AG — have held early discussions on whether they’re overstaffed for the activity expected over the next year, said the people, who asked not to be identified because no decisions on whether to cut jobs have been made. A round of dismissals industry-wide is expected after the summer unless an unlikely September surge in activity arrives, the people said. 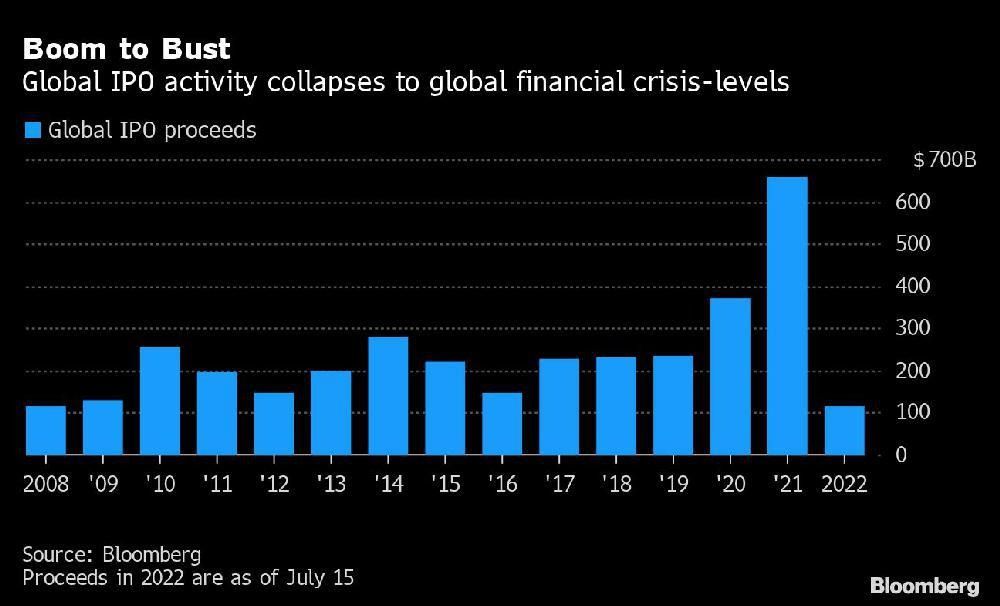 Bank of America declined to comment, while Citigroup executives said during its earnings conference calls that no job cuts are planned. UBS didn’t immediately comment.

“It always takes a few years to build share and build out the client relationships and to see the full fruits of those investments,” Fraser said Friday. “You’re going to see us take a strategic look at this and a long term look rather than just shooting from the hip.”

During the height of the coronavirus crisis, banks rapidly built up teams to help deal with a boom in equity issuance. As governments unleashed a wall of money to help buoy companies and support the economy, valuations reached record levels, propelling never before seen levels of initial public offering activity.

But the geopolitical tensions, combined with supply chain snarlups, heightened volatility and greater uncertainty on the speed and severity of rate increases have rapidly turned that boom into a bust. In addition, surging inflation, and the risk that central banks could trigger recession with their efforts to rein it in, has depressed valuations and kept issuers on the sidelines.

The strain is leading some banks to exert pressure on juniors, often poached at hefty pay packages from rivals, the people said. Young bankers on ECM desks are being asked to reconsider holiday plans to instead research and prepare in the summer amid hopes of an uptick of activity during the second half, some of the people said.

Junior bankers at some firms have also been set client meeting targets for the July-August summer period, which may prove to be a challenge with most clients off for the summer break themselves, the people added.

Almost US$40 billion of equity offerings have priced on European exchanges this year, according to data compiled by Bloomberg. That’s down by more than two thirds on the same period in 2021, the data show.

The pain is already showing up in the results of some of the biggest U.S. lenders. JPMorgan Chase & Co. said on Thursday that it’s suspending share buybacks amid a 54 per cent drop in investment-banking fees caused by dramatic market moves stymieing deals. Morgan Stanley posted a similar decline, driven by an 86 per cent drop in equity underwriting fees. Citigroup’s debt capital markets revenue plunged to the lowest in more than a decade, according to Bloomberg Intelligence data.

The slump is being partially offset at least by continued volatility-driven gains in trading. At JPMorgan, trading revenue jumped 15 per cent in the second quarter from a year earlier, the second-best quarter in the New York-based bank’s history.

Sign up to receive the daily top stories from the Financial Post, a division of Postmedia Network Inc.

Thanks for signing up!

A welcome email is on its way. If you don’t see it, please check your junk folder.

The next issue of Financial Post Top Stories will soon be in your inbox.

We encountered an issue signing you up. Please try again