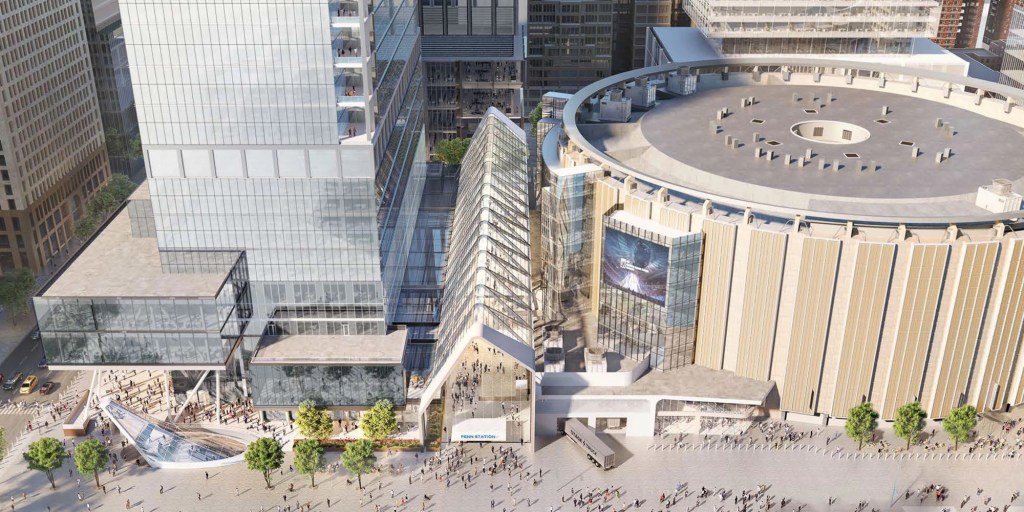 Business owners around Penn Station are racked with worry over Gov. Kathy Hochul’s plan to seize and raze properties in the area in order to make way for 10 new skyscrapers.

The state’s Empire State Development Corporation is expected to vote in the coming weeks to approve the plan that officials concede will displace 473 businesses and 128 households.

The scheme, backed by Mayor Eric Adams, would use tax revenues from the new office towers to fund aesthetic renovations at Penn Station, the nation’s largest transit hub.

Local merchants, who have heard only rumblings about the plans, told The Post they’re concerned about what could be in store for their neighborhood.

“This pub is my livelihood and my life basically,” said Angela Reilly, the 68-year-old owner of Molly Wee Pub at Eighth Ave. and 30th Street.

Reilly — who opened the bar with her late husband more than 40 years ago — first heard whispers about the state’s plans to bulldoze her entire block a year ago.

But she has not been officially notified of the fate of a building she owns, which houses the pub and seven residential tenants who live above .

“They need to renovate Penn Station but they don’t need to take away the whole block,” she said.

Hochul inherited the effort from ex-Gov. Andrew Cuomo. In November, she said the state had reduced the size of the towers by 7 percent — but did not walk back Cuomo’s plan to side-step the city’s zoning process to seize and destroy privately owned buildings.

Neighborhood groups and government watchdogs have accused the governor of diverting billions in much-needed tax revenue that would now instead line the pockets of property developer Vornado Realty Trust. Vornado CEO Steven Roth and his family have given tens of thousands of dollars to Hochul’s reelection campaign.

“There should be enough room to have the best of old and new. They just don’t want to hear that,” said Samuel Turvey, a lawyer fighting the project under the moniker ReThinkPennStationNYC. “They’re like locusts, they have this insatiable appetite.”

Turvey’s group pegs the number of residences and businesses to be impacted at 6,000 and 2,000, respectively — much higher than the state’s estimates.

Other historic structures that would be demolished under the plan include the Hotel Pennsylvania on Seventh Avenue, the Gimbel’s Skybridge over 32nd Street and a church that’s home to several Franciscan friars.

Rocker Steve Marshall, 71, fears New York will lose a piece of music history if his soundproof recording studio — where Madonna laid down tracks before she was a one-name celebrity — were to be destroyed. The studio overlooking Madison Square Garden used to be one of 100 on West 30th Street.

“Almost every major musician in New York has either lived, rehearsed or recorded on West 30th Street,” he said.

“I feel like Jennifer Lawrence in ‘Don’t Look Up’ running around warning people not to knock down these buildings with so much music history,” Marshall added, referring to the 2021 Netflix movie.

The nonprofit Lithuanian Alliance of America (LAA) has occupied the brownstone for the past 112 years. The location was the first port of call for newly arrived Lithuanian immigrants before they boarded trains at Penn Station bound for coal mines in Pennsylvania, steel mills in Pittsburgh or stock yards in Chicago.

“If we lost this building, we would lose our history,” LAA board member Antanas ‘Tony’ Dambriunas said. “More than 100 years of our history and culture would be gone. Generations of memories would be gone. It would hurt.”

The Molly Wee isn’t the only storied watering hole threatened by the redevelopment.

After serving beers for 17 years inside Penn Station, sports bar Tracks was turfed out in 2019 to make way for the current renovations. The owners were not financially compensated by the state.

Three days after Tracks owners reopened their bar across the street from Penn Station, Cuomo released plans to bulldoze Tracks’ new home on West 31st between Seventh and Eighth Avenues. If Tracks is kicked out again to make way for new office towers, the bar owners will not be able to afford to start over for a third time.

“We may get thrown out by the MTA again,” co-owner Michael O’Brien said. “After COVID, and with the economy like it is, we could not afford to open a third place.”

“It’s been a long road and it is all very uncertain, which is frustrating.”

ESD spokesman Matthew Gorton said the plan set for a vote by ESD does not actually entail any property seizure — because the properties not already owned by the developers will be dealt with separately by whichever authority gets tasked with expanding Penn Station southward.

“Whichever Railroad entity is responsible for displacement, should it come to that, will need to provide relocation assistance in strict compliance with applicable laws and procedures,” Gorton said in an email.

The properties already owned by Vornado contain about 150 different businesses that will shutter when the developer builds its skyscrapers, with hundreds of employees.

O’Brien, the owner of Tracks, expects to know more after the primary election wraps up on Tuesday. ESD’s board will vote on the plan in July 2022, Gorton said.

Barfly Abe Figuero, 73, has been drinking at the Molly Wee Pub since 1988, which has become a “second home.” He threw his retirement party there earlier this month.

“Check the hearts of the people in this neighborhood and they’ll be devastated to lose this pub,” Figuero said.